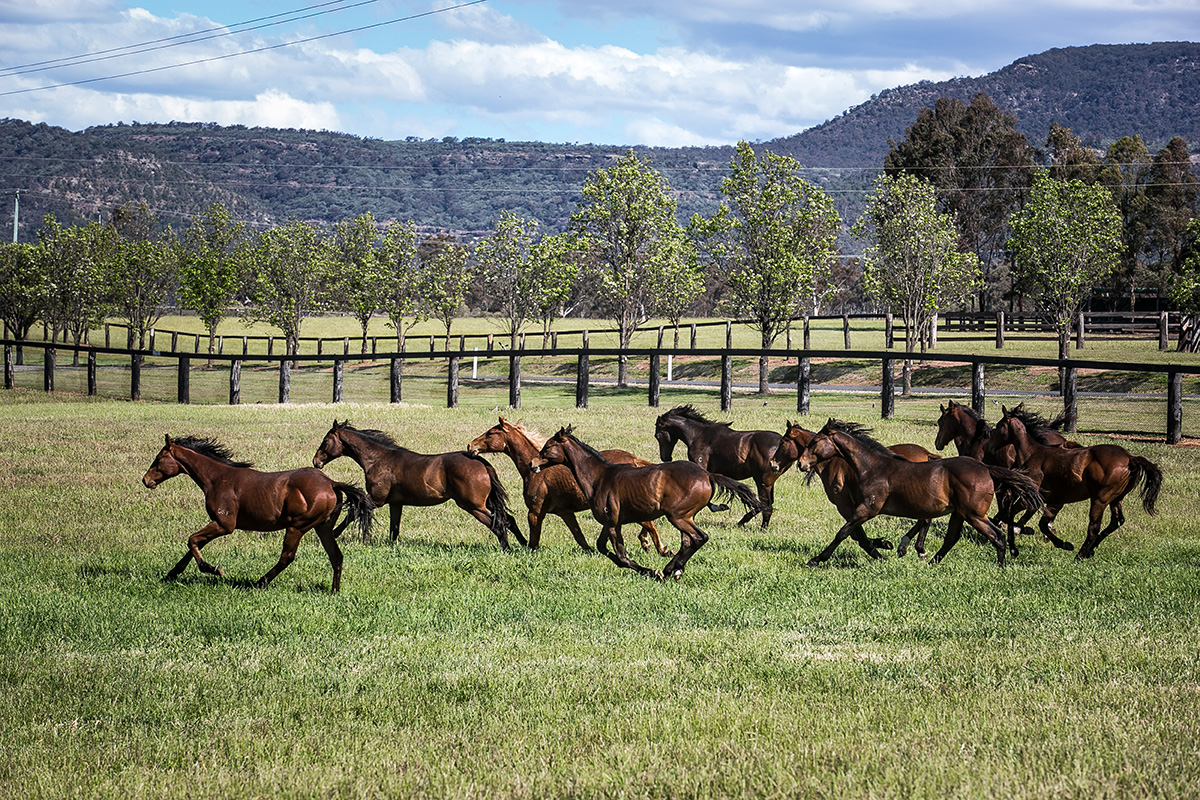 How has your farm risen to the challenges presented by COVID 19?
In Australia we have been very fortunate to be able to continue racing and trading in a way that is very close to normal, which is something that most other industries have not had the luxury of being able to do. In the long run I think it will have a positive impact on our industry. These unprecedented times have meant that people have had to embrace new technologies. This has been evidenced by the success of online sales, our racing being broadcast to new markets and studs conducting virtual stallion parades, all of which have helped open up our industry to a wider audience.

How would you describe your 2021 MMGC draft?
The yearlings are currently in the early stages of their preparation for the sale in January and we are extremely optimistic about the draft that we will present to the market. Through Fastnet Rock, Pierro, So You Think, Rubick, Pride Of Dubai, No Nay Never, Churchill, Caravaggio, Merchant Navy and American Pharoah, as well as the likes of I Am Invincible, Snitzel, Zoustar and Deep Field we are represented by a very well balanced group of sires. Fastnet Rock, Pierro and So You Think have firmly established themselves as leading proven sires in Australasia and have all enjoyed a fine start to the 2020/21 season and we are very excited about our up-and-coming young sires. Buyers will be presented with a very well presented draft of quality yearlings where there will be a horse to fit all budgets and personal preferences.

Merchant Navy, Churchill and Caravaggio are sires with great credentials for success. Why do you think their progeny can make it?
We are particularly excited about offering the first crops of Merchant Navy, Caravaggio and Churchill, three of the fastest sons of their respective world-class sires. Merchant Navy was a brilliantly fast son of Fastnet Rock, and is bred on the same cross as successful sire Hinchinbrook, being out of a Snippets mare. He was an outstanding sprinter who took on the best the world could offer by winning the Coolmore Stud Stakes at Flemington and the Diamond Jubilee at Royal Ascot. His progeny have inherited many of his best traits, and we expect them to be very well received. Churchill is a horse that we have always thought would be particularly well suited to Australian conditions and we are delighted with the quality his offspring. He’s an impeccably bred dual Group 1 winning European Champion two-year-old and dual Guineas winning miler at three from a very fast family. Galileo already has 19 sons that have produced Group 1 winners, including Teofilo and Frankel who have had considerable success here in Australia. Finally, Caravaggio was an outstanding Group 1 winner at both two and three who went unbeaten in his first starts. He is one of the fastest horses Europe has seen in recent times and the highlight of his career was his memorable win in the Commonwealth Cup at Royal Ascot, beating Harry Angel and Blue Point. His progeny look just like he was, fast!

Coolmore have enjoyed great results with their graduates of the MMGC sale. What are some recent highlights for horses reared at Coolmore?
Success at the highest level for graduates of the farm is what we strive for in everything that we do at Coolmore Australia. The pastures and our staff at Coolmore are second-to-none and this has shown in the results on the track in recent years, a trend that has continued this year with 4 individual Group 1-winning graduates in 2020. Obviously Winx was raised and grazed on the farm and went through our 2013 Magic Millions yearling draft, however she is one of 8 Group 1-winning and 27 Stakes winning graduates of the farm since the start of 2019. Outside of Winx, some highlights from our recent Magic Millions offerings include Group 1 winners Vancouver, Sherwood Forest and Winning Ways and Stakes winners Rock, Love Tap and Game Keeper amongst others.

American Pharoah has continued to excel in the Northern Hemisphere. You are heavily represented with his second Australian crop, can you discuss why you think they will be successful in Australia?
American Pharoah has already established himself as a world-class sire with Stakes winners in America, France, England, Ireland and Japan, including two Group 1 winners on turf. The reports we are getting from his trainers throughout Australasia are overwhelmingly positive and we expect a number of them to be running and winning in the near future. His first Australian runner, Head Of State trained by Chris Waller, made a very encouraging debut in the $1 million Golden Gift at Rosehill, and we have very high hopes for him. The have great minds, are very sound and they clearly love turf surfaces, so we are confident that they will thrive in Australian conditions.

If animals could talk, which would be the rudest?
Magpies

What inanimate object do you wish you could eliminate from existence?
Speed cameras

What is something that is really popular now, but in 5 years everyone will look back on and be embarrassed by?
Tik-Tok