The quality of pedigrees on offer in any Cressfield draft is always mouth watering, and this year’s Magic Millions Gold Coast Yearling draft ticks all those boxes once again and with recent graduates like group placed three year-olds Aquagirl and Euphoric Summer, buyers can inspect with confidence.

Bluebloods spoke to Liesl Baumann about Cressfield’s draft and a few other interesting matters.

How has Cressfield risen to the challenges presented by COVID19?
Tackling COVID19 in the workplace has definitely been a challenge from a number of angles. Horses don’t notice human pandemics, so we had to ensure that their care remained uninterrupted and maintained at a high level. We are fortunate enough that the workforce already operates largely separated in teams and we were able to continue to do this. We implemented a number of other measures such as daily temperature recording, extra cleaning and making sure sanitiser was on just about every fence post.
As time has progressed, the challenge has been not to become complacent, to maintain hygiene standards, and keep the risks at the forefront
of our minds.
There has been much discussion on how it has affected the industry in particular about how we get better at marketing our product. The relative success of the online sales has really enforced the importance of good quality media and its exposure. I think we will invest more in quality videos, photos, and their position online, rather than just relying on the physical inspection at the marketplace to sell horses.

What are the unwritten rules of where you work?
No one ever gets to take Tuesday off. It’s our unofficial hump day. I think we all cope a little better once Tuesday is over.
We also have some written rules, nicely laminated on the notice board. Fairly standard stud rules; if you let go of a horse, let a horse through the crush, don’t latch a gate or sleep in, then you have to buy coffee for your work buddies. Unfortunately, WHS has eliminated our “pay for your mistakes with a carton of beer” policy but a well caffeinated work crew is probably a lot more efficient than a hungover one. 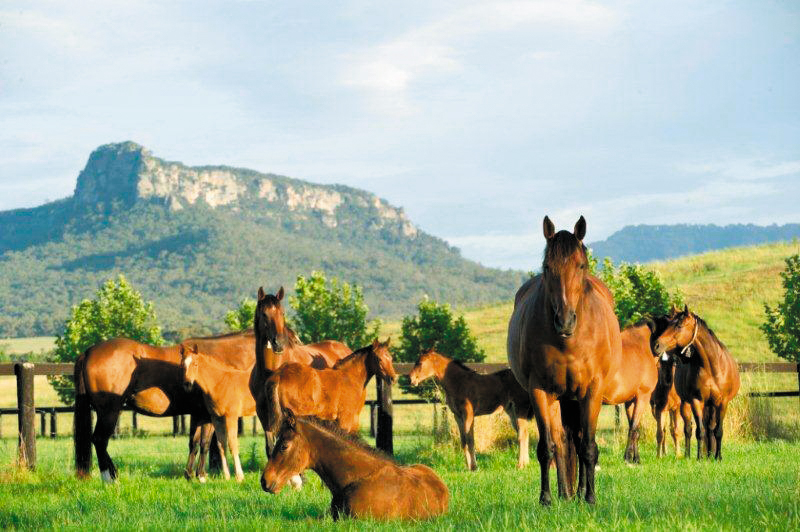 What’s the most imaginative insult you can come up with?
I’m afraid I’m not terribly creative in this regard. My father in law, however, would undisputedly wear the crown for this. As anyone that has worked with Link Baumann (which is most of the Hunter Valley) would know, his off the cuff, three sentence long insults are legendary.

What is something you refuse to share?
My toothbrush. And nor should I ever have to.

Cressfield will present seven colts and three fillies at the 2021 Magic Millions Gold Coast Yearling Sale. A stallion prospect beckons with the colt by All Too Hard from Gr.1 winner River Dove, making him a half-brother to promising sire and group winner Headwater. “The River Dove is an attractive colt with a balanced shoulder and hindquarter and fluid walk.”
Also by All Too Hard is a colt out of Gr.3 Bow Mistress Trophy winner Isibaeva, who won eleven races and is herself out of another tough racemare, Dragila, a multiple Listed winner of eleven races. “A sound, athletic style of colt who is thriving throughout the prep.” A colt by All Too Hard out of six race winner Nikkirina whose four to race are all winners. “A smart looking, sound colt with a lot of presence, correct and well developed.”
Cressfield have two colts by Merchant Navy, whose first yearlings will gain plenty of market attention, given that he’s a Royal Ascot winner who also won the stallion making Coolmore Stud Stakes. One colt is the second foal of
a stakes placed two year-old winner, Shrill, who is closely related to dual Gr.1 winner Old Persian. “A strong well-muscled colt that stands over a bit of ground, good sized nostrils, developed gaskin and a lovely temperament to boot.”

Three of Cressfield’s Magic Millions colts are from one of their strongest families; that of recent VRC Oaks winner Personal, Procrastinate, Galapagos Girl, Laisserfaire, A Time for Julia, Time Thief, and Foreplay. The Merchant Navy colt is the first foal of winning mare Epitomise, who is a half sister to recent VRC Oaks winner Personal (Fastnet Rock), and with Merchant Navy being a son of Fastnet Rock, there is a close relationship between this colt and the Oaks winner. “A good-sized colt with solid bone, good feet and strong shoulder. One of his best attributes is his temperament, he is a sensible and intelligent colt.” The No Nay Never colt from Procrastinate family member and winning mare Floreana, who is a half-sister to Cressfield Magic Millions graduates Listed winner Villami and group place winner Aquagirl. “A well related, refined style of colt, broad between the eyes and a zestful spirit.” The Shooting to Win colt out of Personal’s half-sister Personification is another from this family in this draft. His unraced dam has left four winners from as many to race.
“A scopey, athletic colt.”

Of the fillies in this draft, the Merchant Navy filly from dual Gr.1 winning sprinter Platelet will be highly sought after. Not only is her dam a quality racemare, but Platelet has started her stud career well with her first foal, a three quarter sibling to this yearling, already a winner.

“A beautiful filly, full of spirit, compact and with a business-like attitude.”

Cressfield will also offer two fillies by Cressfield bred group winner and sire Headwater; one from tough ten win race mare Snippetee Bee who is “a very racy looking filly with a feminine head, good shoulder and deep girth” while the other is out of Pfeiffer, a well related Storm Cat mare.

“A very strong, well developed precocious type of filly with a hefty hindquarter.”