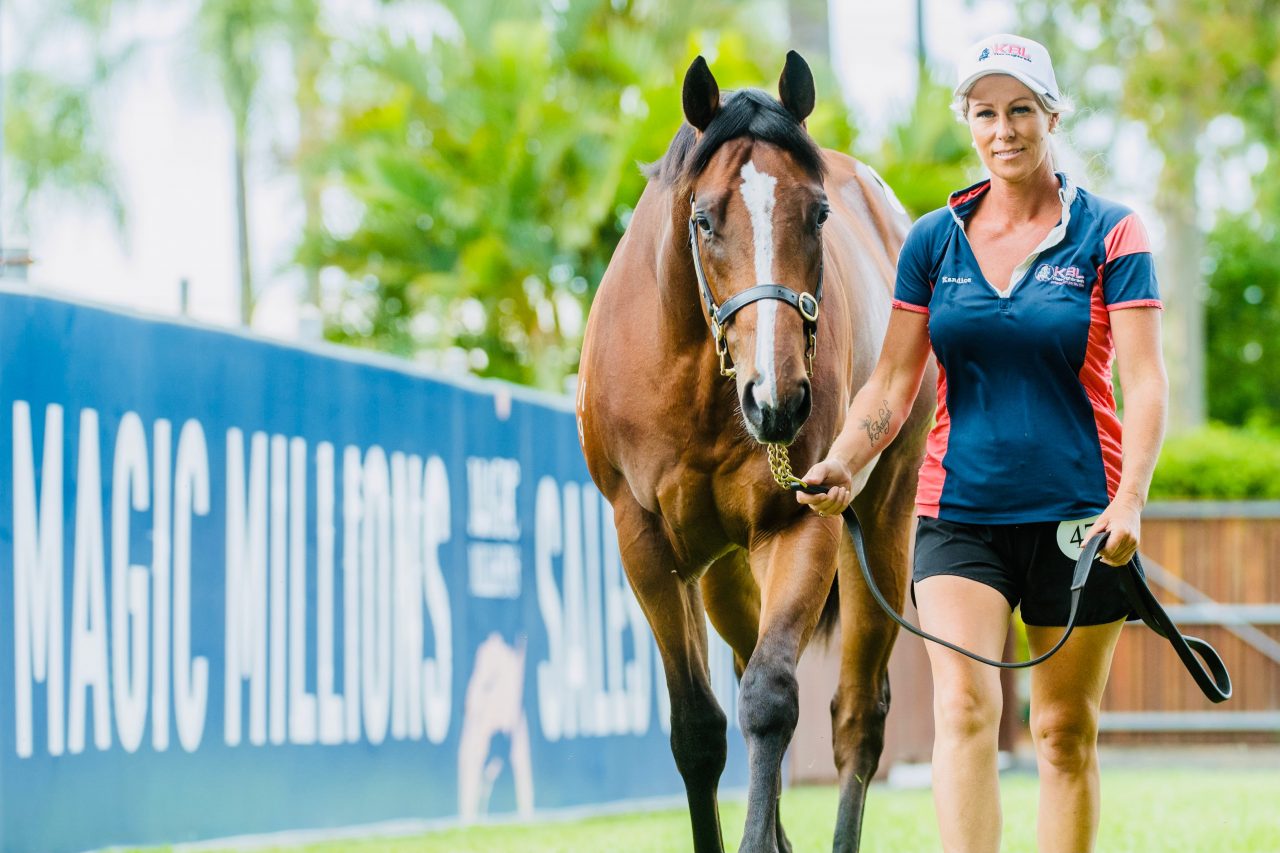 Sale preparation experts KBL Thoroughbreds have already seen racetrack success from their most recent Magic Millions Gold Coast Yearling Sale draft with Cavalla (Nicconi) who won as a two year-old on debut in September 2021. In 2022, KBL Thoroughbreds will present another quality draft of thirty yearlings on behalf of their clients.

Kandice Pritchard of KBL Thoroughbreds spoke to Bluebloods about what she loves about this sale.

“I enjoy the whole process of getting yearlings ready for sale, and then to watch them continue to develop as they become racehorses. Following the journey of each horse is a great thrill.”

With thirty yearlings by a range of proven and unproven sires on offer, the KBL Thoroughbreds draft looks to have something for every buyer. Pritchard’s pick for the 2YO Classic, the Capitalist filly lot 656, is the first foal of two year-old winner and stakes placed Uratta Belle (I Am Invincible). There is plenty of two year-old form in this family. Capitalist is a son of Champion Sire Written Tycoon, and KBL Thoroughbreds will offer a Written Tycoon filly, lot 46, out of city winning stakes placed mare Fine Mist (Good Journey) whose first foal is a two year-old winner by Capitalist, therefore a three-quarter sister to this yearling. “She looks an early type.”

A colt with a stallion’s pedigree is lot 962; by Spirit of Boom, this half-brother to stakes placed Sutter County is out of Listed winner Rio Osa (Canny Lad), herself a full sister to G1 winner Preserve (dam of Safeguard and Archives), and a half-sister to G1 winner Denman, and to the dams of Golden Slipper winner Kiamichi, Soul, and Amazing Beats.

A half-brother, by first season sire Trapeze Artist, to G1 Australian Derby winner Quick Thinker is lot 1055, and this colt has a stellar pedigree with his stakes placed dam Acouplamas (Al Maher) being the dam of three stakes horses already. Another yearling by an exciting first season sire is lot 76, mentioned earlier as a 3YO Guineas candidate. By The Autumn Sun, lot 76 is out of Group winner Girl in Flight (Commands) whose first foal is a winner of three races.

A Justify colt, lot 1172, out of speedy G3 winner Lady Melksham (Artie Schiller) is a half-brother to Avon River who won at two and ran fourth at listed level.

An Impending colt with upside is lot 407, being a half-brother to two winners out of a tough fast mare in Queen of Eight (Haradasun). “The two year-old from Queen of Eight has been named Athletica and he won a trial at Randwick recently in impressive style. The yearling by Impending looks an early type too.” Also by Impending is lot 456, a half-brother to three year-old Group placed winner Miss Inbetween, out of winning mare Ruby Ninetails (Red Ransom) from the family of Zipping.

A full brother to G3 winner Tailleur (Shooting to Win) and a half-brother to Group winner Raiment is lot 864, out of six-race winner Clothing (Commands) from the family of G1 winner Over. Lot 1228 by Better Than Ready is a half-brother to G1 placed winning two year-old Heart Skipt a Beat. Another well-related filly is lot 255, a Nicconi half-sister to stakes placed city winner Spaceboy; while lot 1010 is a colt by Satono Aladdin from Listed winner Tarloshan (Istidaad).

What is the most annoying way you’ve been injured?
My partner kicked a horse toy ball over the fence while I was leading a horse.
The horse shied and broke my foot.

What is the most important object you own?
My barn here at KBL Thoroughbreds.
It’s how it all started.

What is something you can’t resist buying?
Horse rugs. I have a whole shed full of them!