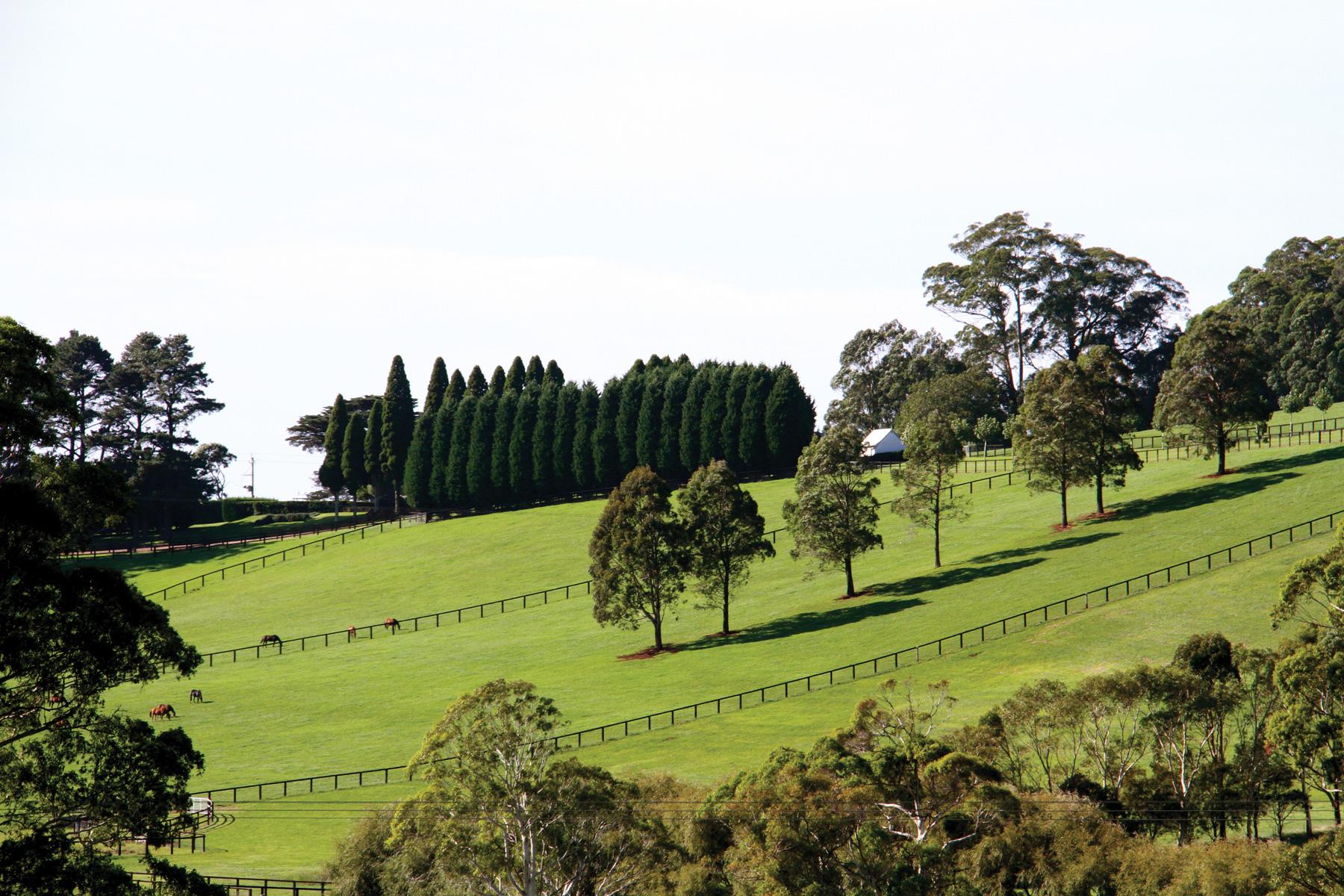 John Muir’s Milburn Creek is a reflection of his passion for the thoroughbred. The farm is located in idyllic surroundings at Wildes Meadow in the NSW Southern Highlands, an area which has become the epicentre of a new wave of premium boutique farms over the past decade, an area that has in truth punched well above its weight over a long period when it comes to breeding superior racehorses.

With highly regarded and vastly experienced horseman Scott Holcombe as manager, John Muir’s Milburn Creek has continually upgraded its broodmare band, the farm and its facilities, resulting in a distinguished output of major race winners and quality yearlings being consigned to Australia’s premier sales each season. Gr.1 winners such as Hampton Court, Sizzling, Redoute’s Dancer, Once Were Wild and Secret Admirer were all raised and consigned by Milburn Creek, with a very long list of stakes winners as the outstanding supporting cast including $520K Easter graduate Balaabel already a winner and stakes placed this season.
Milburn Creek’s constant search for excellence has resulted in its strongest draft for the 2020 Inglis Australian Easter Sale with 11 colts and 2 fillies out of young mares and with close relations to Chautauqua, Hampton Court, Showtime, D’Argento, Highland Reel, Gregers and Summer Passage among the many highlights.

Taking them in turn we start with LOT 45 a bay colt by leading sire Written Tycoon out of the young Redoute’s Choice mare Luluoru. Redoute’s Choice is Australia’s champion broodmare sire and this cross has already produced the talented Teleplay and Masthead.

Scott’s comment:
Very typical of the sire, a tall leggy correct colt. The mare has a promising 2YO by I Am Invincible with Chris Waller called “Jack the Lad “and of course you can’t get a better broodmare sire than Redoute’s Choice
Second on offer is LOT 50 a bay colt by the very successful and sadly missed Hinchinbrook who is having a great season, out of the stakes producing Estambul mare Madamesta. This is the mare’s fifth foal, the previous four are all winners and include the flying multiple SW Bullpit $500k plus, while the dam is a half-sister to the prolific Riceman 16 wins and $560K plus, this is a great winning family.

Next offering is the first of the two fillies LOT 124 by emerging sire star Pierro out of the multiple stakes producing Tale of the Cat mare Pampurr who is a half-sister to multiple SW Niagara Falls, second dam is Bracken Bank and this is the family of Elite Falls, Crystal Falls and Charge. An investment quality filly.

Scott’s comments:
Moves well, typical of the Pierro‘s and would expect her to come into her own at three! Pierro keeps producing classic winners!

The next on offer is a bay colt LOT 151 by crack sire Written Tycoon and is the second foal of Queenstown, a SW and multiple Group placed daughter of Golden Slipper winner Stratum from the family of Serious Speed $956K, Majestic Music and multiple Gr.1 winner March Hare. The Written Tycoon/Stratum cross is responsible for Inglis Premier RL winner Stoker $300K plus.

Scott’s comments:
Lots of Queenstown about this Colt ! Correct, good bone, clean hocks and flashy! His half sister with Godolphin looks to be coming together – she is the recent winner Tahuna.

Current leading first season sire Pride Of Dubai is the sire of the next yearling from Milburn Creek, LOT 170 a chestnut colt who is a half-brother to Gr.1 winner Hampton Court and three other winners of multiple races, namely Lucky Fish 7 wins, Coonawarra 5 wins and Mutamayel 3 wins. The mare’s first four are all winners by Danehill line sires and this is her fifth foal by a stallion out of a Danehill mare, an exciting prospect.

Scott’s comment:
This colt will be one of the stand out colts of the sale on type – correct, strong, great head and eye. Uses him self extremely well! Sire looks to be one of Australia’s real up and coming young stallions!

Next on offer is LOT 232 a beautifully bred colt by crack 2YO sire More Than Ready out of a full sister to Gr.1 winner Sweet Idea and her brother the multiple Gr.2 winner and Gr.1 placed Showtime, now a young gun on the Arrowfield roster. This colt has strong pedigree similarities to this season’s Breeders Plate winner and leading Golden Slipper contender Global Quest as both are by More Than Ready out of Danehill line mares and also inbred to Woodman. A proven cross.

Scott’s comment:
A very typical More Than Ready – very forward 2YO type. Intelligent head, great hips, short coupled -will be popular at the sales. His half-sister is recent 2YO stakes winner Supreme Idea (Lonhro P. Randwick) and this is a real 2YO family.”

So You Think is currently having a banner season with 7 stakes winners putting him second to Snitzel and equal with I Am Invincible, Exceed And Excel, All Too Hard and Pierro. Exalted company. Milburn Creek’s colt LOT 243 is by this exciting son of High Chaparral and is the second foal of winning Northern Meteor mare Third Degree, who is a half-sister to crack galloper D’Argento winner of the Rosehill Guineas-Gr.1 and second in the Epsom H-Gr.1 ($1.1 million earner.) This is the quality Milburn Creek family that has previously produced Gr.1 winner Sizzling, $1.33 million.

Scott’s comment:
Colour, head, markings all, very much like his sire So You Think. He has good bone and moves well for a big colt

The next colt on offer is LOT 264 by Australia’s multiple champion sire Snitzel out of VRC Oaks placed Valdemoro who is by multiple champion broodmare sire Encosta de Lago from the family of international champions Highland Reel, Cape Of Good Hope (both starred in Australia in recent years) and Idaho (all ¾ brothers to Valdemoro). There will arguably be no better bred colt on offer in Australia this year.

Scott’s comment:
The full-sister is in the Godolphin stable as a current 2YO. Forward good moving Snitzel which you would expect to see as an early 2YO. A family does not get much deeper than with this colt.

The progeny of I Am Invincible just keep on winning stakes races so LOT 278 by that sire out of the stakes winning Hussonet mare Walk With Attitude is sure to have plenty of admirers. The dam’s first to race is the talented Spend winner of Sydney and Melbourne Saturday races, Gr. placed and Gr.3 4th from just four lifetime starts, a rising star. This is the prolific stakes producing family of Invincible Spirit and Pride Of Dubai. This colt has a very clever pedigree pattern being inbred to the influential mare Eljazzi via the closely related Invincible Spirit and Hillfa. This pattern has a very high strike rate for producing superior runners and sires.

Scott’s comment:
Massive family “Spend looks to be a horse to watch -recent Flemington win very was exciting!” Very typical Vinnie, looks, sharp and attractive! “Unfortunately we lost his sister before her second preparation with Snowden team and she had shown Peter great ability”!

Scott’s comments:
Lot 290 is a pinhook through Grant Bloodstock. This a most attractive colt, moves well for a big fellow – good bone, deep girth and great hips by a world famous sire who has made a great start!

Golden Slipper winner Capitalist is represented in the Milburn Creek draft by LOT 442 a bay colt out of the winner producing Fraar mare Fiesole, who is a half-sister to two outstanding stakes winners in Gregers (multiple Group winner of $900K plus) and Girl Guide (Gr.2 winner of $397K).

This is the family of Coolmore Classic winner Ofcourseican and Gr.1 winner and exciting young sire Gimmethegreenlight. Here is a Capitalist with a lot of scope, I love this colt. Dark brown, attractive head, correct, moves well balance.

The second filly from Milburn Creek is another by USA triple crown winner and emerging champion sire American Pharoah out of High Valyrian, a winning mare by the great High Chaparral. High Valyrian is a daughter of the crack Danehill mare Shania Dane (multiple Group 2 winner, multiple Gr.1 placed, $846K) who is a half-sister to $4.2 million earner Scintillation. This is the family of Gr.1 winning 2YO Summer Passage and multiple SW Northwest Passage. A pedigree to shine both on the track and at stud.

Scott’s comments:
Lots and lots of quality – very neat type as are many in her female line. “Great family!” She moves beautifully, quality head balance correct, and by a star.

To put the final flourish on this great draft Milburn Creek will present LOT 495, the first foal of a 9 times winner, the multiple SW Iggimacool ($461K), by Sadler’s Wells successful son Savoire Vivre. This colt is by Golden Slipper winner Capitalist and has an exciting pedigree combining the sire lines of Mill Reef’s son Last Tycoon with Sadler’s Wells. This form of inbreeding to the influential mare Lalun has recorded exceptionally high rates of SW to runners in numerous iterations. It’s a winner.

Scott’s comment:
Typical of what we have previously seen by the sire. Forward, correct, early smart fast looking ! Should be popular!

The 2020 Milburn Creek draft for the Inglis Australian Easter Sale at Riverside Stables has a wide choice of quality yearlings to suit the strong buying bench that will undoubtedly be in attendance. Scott Holcombe and his team will be eager and well prepared to parade this exciting draft for potential buyers. John Muir, Scott and the team look forward to catching up with regular clients and meeting new ones in Barn C, Stables 15-23,23-32. ©