New Zealand-bred and trained gelding Tavago sprang something of a surprise in scoring an easy win in the $2m 2016 Australian Derby-Gr.1 (2400m) at Randwick. The son of Tavistock (NZ) (Montjeu (IRE)) relished the soft conditions on the day to defeat last spring’s VRC Crown Oaks winner Jameka (Myboycharlie (IRE)).

In third spot was Tally (Street Cry (IRE)) with Tavistock’s VRC Victoria Derby-winning son Tarzino, the favourite, a distant and disappointing fourth. Tavago was bred by Sir Patrick and Justine, Lady Hogan, in partnership with Mrs C.A. and J.H. Kelly and this Cambridge Stud product cost his owners only $NZ60,000 when sold at the 2014 New Zealand Bloodstock National Yearling Sale.

His young sire, perhaps the fastest son of the classic racehorse and champion sire Montjeu (Sadler’s Wells) stands at the famous Cambridge Stud (2016 fee $NZ65,000 plus GST, book closed) and promises to be a worthy successor to earlier Cambridge star stallions Sir Tristram and Zabeel as already he has to his credit three Derby winners, Tarzino, Tavago and Werther, winner of the 2016 Hong Kong Derby, plus another Gr.1 winner in Volkstock’n’Barrell and other stakes winners Avisto, Hasselhoof and Tavy from his first two crops.

Tavistock showed enough speed and maturity to win over 1100m as a two year-old in New Zealand before campaigning in Melbourne as a three year-old, winning over 1400m at Flemington and placing second in the Listed MRC Vain Stakes (1100m). He was then returned to New Zealand to be rated Champion Sprinter of the 2009-10 season, capturing two Gr.1 events at 1400m, the Waikato Draught Sprint and the Mudgway Partsworld Stakes. Also that season he was runner up in the WRC Thorndon Mile-Gr.1 (1600m) and visited Melbourne again to win the Blamey Stakes-Gr.2 (1600m).

Tavago comes from one of New Zealand’s best modern day female lines and one which has served Cambridge Stud with consistency and distinction over four or five generations. It is also the family of champion racehorse and sire Lonhro.

The Australian Derby winner is the fourth foal, third and best winner for the unraced Sara Ann, a daughter of earlier Cambridge sire Stravinsky, Europe’s champion short course sprinter of 1999. Stravinsky has enjoyed considerable success as a sire of winners but it seems his greatest contribution to the breed is as a maternal grandsire of not only Tavago, but also of Australian stars Lankan Rupee (Redoute’s Choice), Mosheen (Fastnet Rock), New Zealand Gr.1 winner Julinsky Prince (Darci Brahma) and in Europe of top class racehorse and rising sire Rip Van Winkle (Galileo). Stravinsky mares have worked well when bred to Danehill-line sires.

Sara Ann is a sister to one of Stravinsky’s best Australasian winners, La Sizeranne, dam of stakes winner Za Moulin Rouge (Street Cry). Her stakes placed dam Tricia Ann (Zabeel) is a close relative of the above-mentioned Lankan Rupee and a three-quarter sister to Grosvenor (Sir Tristram), an outstanding racehorse and successful sire, and to other major winners.

Through Tricia Anne Tavago has inherited much classic stamina as her dam My Tricia is by the stoutly-bred Hermes from Gay Poss, a daughter of the great staying influence Le Filou from Sweet Time, by Summertime, another outstanding sire of such notable performers a Broker’s Tip, Fair Summer, Pique, Sir Dane, Sobig, Sometime, Star Belle, Summer Fair, Summer Fiesta, Summer Prince, Waipari, Ziema and a host of others.

Trained by the late Bart Cummings, Tavago’s fourth dam Gay Poss was among Australia’s best female performers throughout 1970 recording wins in the AJC Oaks, VATC Caulfield Stakes, VRC Craiglee Stakes, VRC Kewney Stakes and the South Australian St Leger. Tavago’s pedigree is a well balanced and fitting one for a classic winner. In keeping with a growing number of stakes winners he is line bred to the mare Special (5fx4m,6m) through her celebrated grandson Sadler’s Wells and son Nureyev, both by the great Northern Dancer.

Another key feature of Tavago’s pedigree is his 5mx4f double of the influential Blushing Groom, while another more distant duplication to note is to champion French sire Val de Loir (6m,7fx6f), who is from the same female line as Special, while there is a strong build up of Nearco/Nasrullah and Hyperion in Tavago’s background. 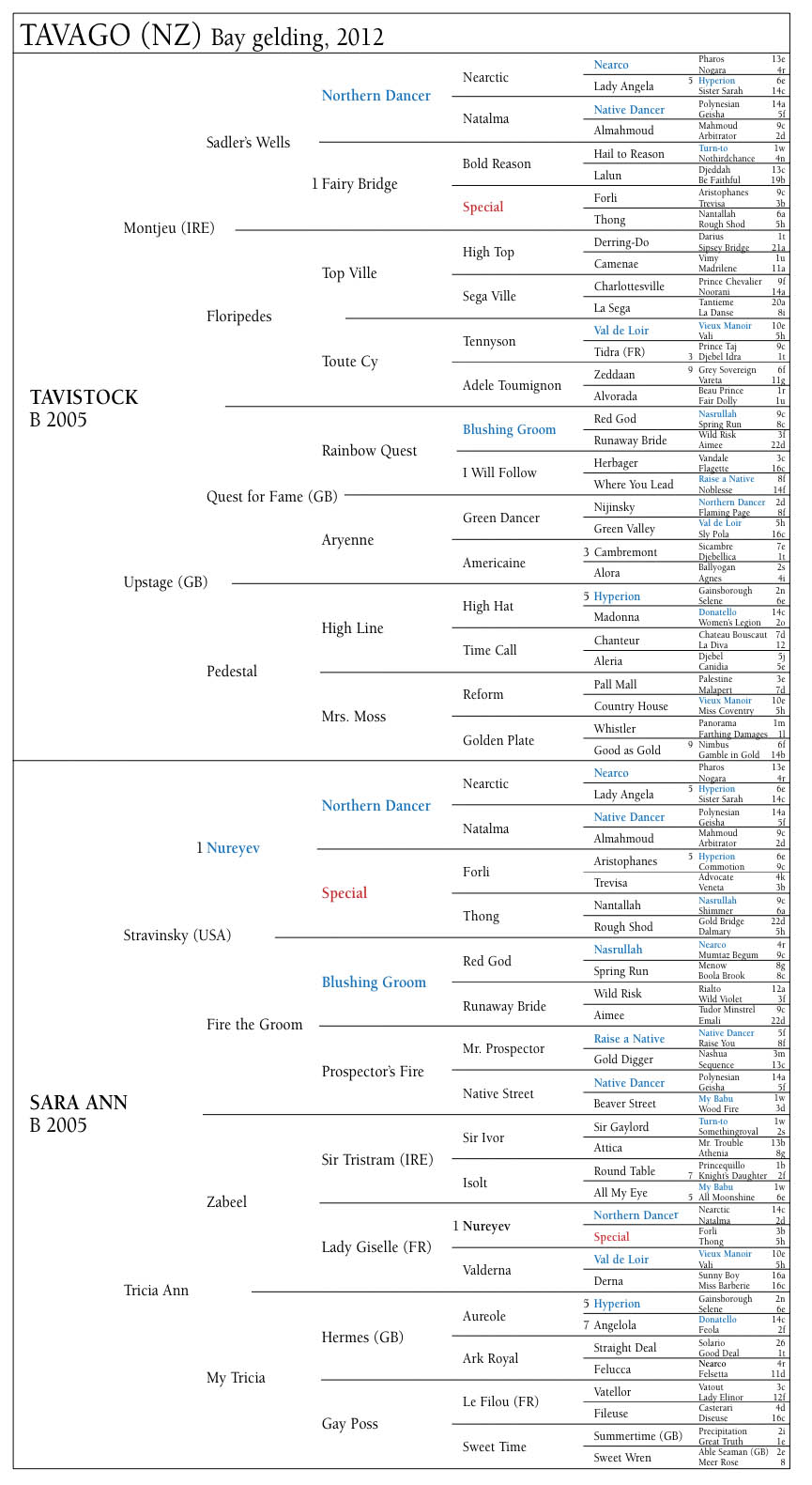