When Is The Right Time to Judge a Stallion?

One of the main topics of conversation at Inglis Easter 2016 was about the second season sires. While vendors with yearlings to sell have a good reason for asking buyers to be cautious in their judgement, buyers want to see fast results for the big prices they spent in 2015.

The fascinating conversations around this topic all lead to one question. Is it possible to quantify WHEN to judge a stallion as a success or otherwise?

Before we even attempt to answer the question of timing, we have to answer the more straightforward question. Is it possible to judge IF a stallion is a failure? The odds of elevated commercial success are slim (around 5% of stallions); yet many stallions are successful in their own way, as sires of Gr.1 winners, or as solid bread and butter horses who churn out winners every week. And success, or failure, often is confused with value, or perceived value.

In an attempt to simplify this enough for the space allowed in a magazine, I have reduced this to a discussion about Gr.1-winning and producing stallions ONLY. Arion Pedigrees put together a query for me that included every stallion who stood in Australia and New Zealand with their first season between 1995 and 2012. This query covered 1942 stallions, among them 394 who were Gr.1 winners. For each Gr.1 winner, Arion Pedigrees included the date of the horse’s first win, first stakes win and first Gr.1 win. And then the same data for the first win of their progeny, first stakes winning progeny and first Gr.1-winning progeny. Of these 394 Gr.1-winning stallions, only 151 have left a Gr.1 winner (although some of the younger ones might still achieve this).

To make this data useful, I took the date the stallion officially turned two and counted the days until his first win. For example, the shortest time frame in our sample was Choisir (Danehill Dancer-Great Selection by Lunchtime). Officially a two year-old on August 1, 2001, he won his first race 52 days later on September 22, 2001. At the other end was Good Journey (Nureyev-Chimes of Freedom by Private Account); officially a two year-old on January 1, 1998, and a winner as a four year-old on November 17, 2000; a distance of 1051 days.

On average, our Gr.1 winners won their first race 272 days after turning two, or nine months after becoming two year-olds. The perception is that there is a premium paid for a precocious stallion, so it would be interesting to line this data up against their initial stud fee.

Back to the issue of timing, and I ran the same data for the progeny of our sample of Gr.1-winning stallions. The result was that the range of time to get the first winner was wider than for the stallions themselves. The fastest stallion to get a winner in our list of stallions was Al Akbar (Success Express-Gala Night by Blakeney), whose first winner Aka Bilk came just 35 days after his first crop turned two. The longest time it took for a stallion to get his first winner was a massive 2486 days after his first crop turned two. That’s nearly seven years, however, the stallion in question had only 18 foals in his first seven crops, so he is hardly representative of the typical situation.
On average, our Gr.1-winning stallions took 270 days to leave their first winner. That’s nine months, the same as for their own first win. The median number of days to leave their first winner is 197 days; which means that by the middle of February only HALF of all Gr.1-winning first season sires should have had their first winner. February is far too soon to judge whether a horse is going to be a success.

If we look at black type victories, it took our Gr.1-winning stallions, on average, 403 days to win their first stakes race. That’s 13 months, or one month into their three year-old season. For their progeny, 293 of our 394 Gr.1-winning stallions have left a stakes winner, that’s 74%. Of those, the average number of days to achieve this result was 632 (or 21 months). 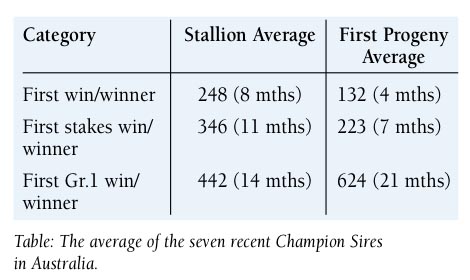 Only 151 of the 394 stallions left a Gr.1 winner, that’s 38% of stallions. Of these stallions, it took them between 35 and 954 days to leave their first winner. That’s not an error; it took one Gr.1 winning stallion two and a half years to get his first winner (a four year-old from his first crop). His first stakes winner (a different horse) came just two months later, and that stakes winner became a Gr.1 winner a few months after that. It took the 151 stallions an average of 1023 days to leave their first Gr.1 winner: twice as long as it took them to win their own Gr.1 race (574 days).

To wrap up this judgement call, let’s look at the stallions who have won Australian Champion Sire since Danehill’s reign ended in 2004-05. Including this season’s probable winner, there are seven stallions on this list.
Table: The average of the seven recent Champion Sires in Australia.

Are the yearling sales too soon to judge a second crop stallion? Even among the seven Champion Sires, six of the seven stallions had their first winner during the spring; while the other had to wait until his first crop runners were almost three year-olds. So yes, it seems the yearling sales are too soon to judge a stallion. But by the time his first crop youngsters are half way through their three year-old season, the odds of success start to diminish, but not to zero.

The data for this article took a fair amount of processing, so a big thank you to Josh Hay at Arion Pedigrees for his assistance.