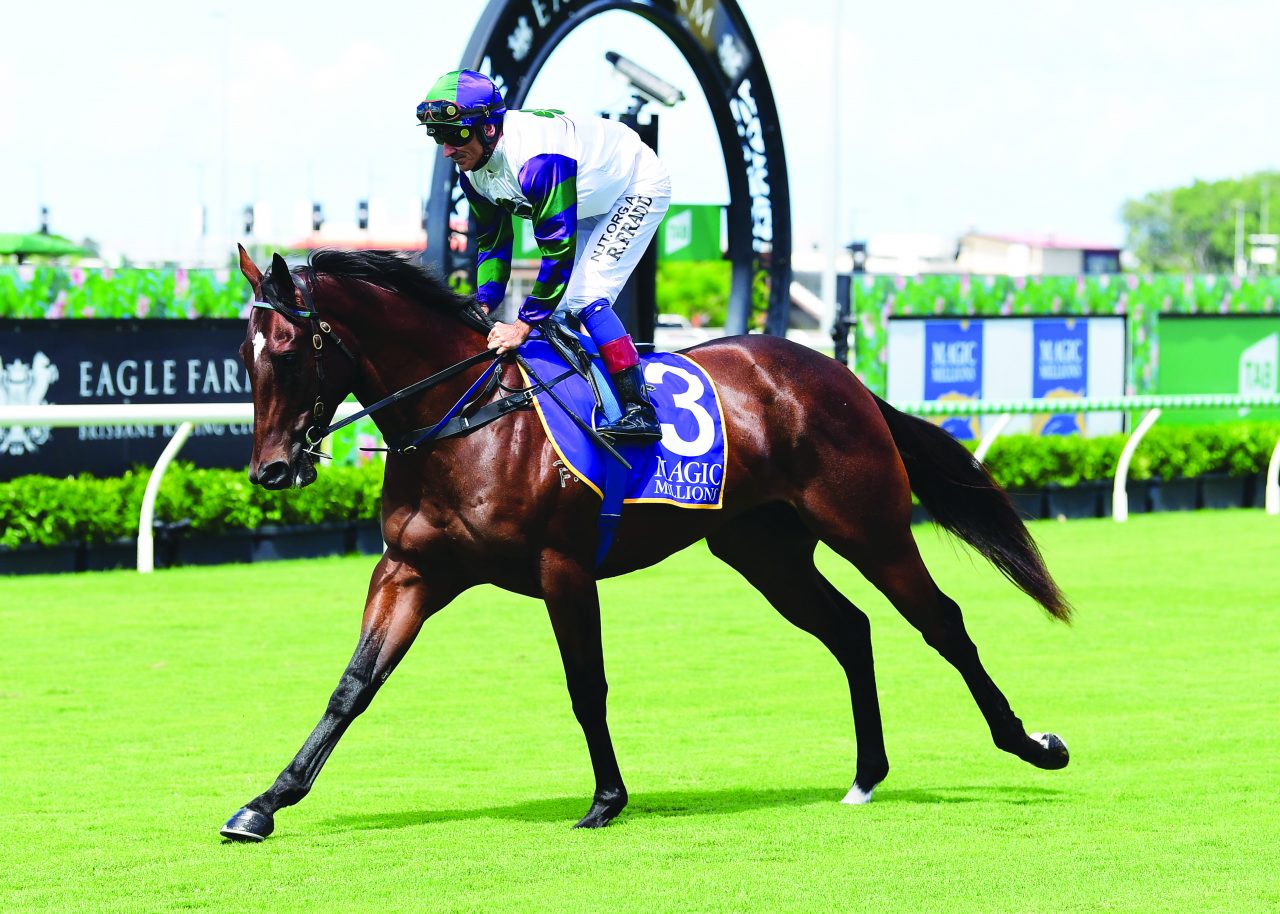 Better Than Ready just keeps going from strength to strength and on the back of another stellar season he continues to prove popular with breeders, owners and trainers. All of whom will be keen to inspect his Magic Millions yearlings, including ten members of the Yarramalong draft.

“Our 16 strong draft is full of athletic two year-old types including a full brother to the Champion Queensland Two Year-Old Alpine Edge. He is sure to impress and is a must-see lot,” said Richard Foster.

“The Harry Angel colt from one of Shadwell’s best families is also a stand-out and we have six first foal yearlings from active families and six from already proven mares. They are bred on the Yarramalong hills and display strong bone and great constitution.”

“Calm temperaments and confidence are a feature of our draft; horses who  are bred and raised to race early and win.”

Lot 62 brown colt from Freezethemillions (by Freeze): brother to Alpine Edge, the Group 3 winner who was a fast finishing second in the 2021 Magic Millions Classic. His stakes placed dam is a descendant of the influential matriarch Summoned, a family which continues to excel at the highest levels.

Lot 324 bay/brown colt from Not A Single Woman (by Not A Single Doubt): son of a winning sister to the stakes placed Free Of Doubt and half-sister to the two times Group 3 placed Wazzenme from the family of Flemington spring carnival stakes winners Inspire and Our Joan Of Arc.

Lot 486 brown filly from Seagull (by Exceed And Excel): a sister to talented recent 2YO winner Mouette, she is a daughter of a half-sister to the dual stakes winner Soothing from the prolific Song Of Norway family that has produced the big race winners Black Caviar, All Too Hard, Magnus and Ole Kirk.

Lot 573 brown filly from Summer Glen (by Snitzel): out of a city performed race mare whose dam is a half-sister to the Group winners Grey Song and Tonz More Fun, the stakes placed Fairessa and the dam of the Group 3 mare Dirty Thoughts. Popular Queensland mare Slanchyvah also hails from this family.

Lot 869 brown colt from Commanding Epic (by Commands): his dam’s first three foals are all by Better Than Ready and all have ability including the triple city winner Girls Are Ready. Hails from the family of the flying Angst.

Lot 949 bay colt from Pilgrim (by Danehill): his dam’s 11 winners include Better Than Ready’s stakes placed Paredo, the city winner Ready To Roam and the lightly raced three year-old winner Gypsy Ilse. Also a half-brother to the stakes placed Snipzu (dam of the Group 1 placed The Drinks Cart) and the multiple city winner Pizonie.

Lot 1027 bay colt from Trickett (by General Nediym): half-brother to two winners out of a city winning sister to the Group 2 filly Ichihara and the Listed winners Au Chocolat and Isurava (dam of the Group 2 stallion Menari) from the family of Whisked and Tie The Knot.

Lot 1150 black filly from Hepburn (by Exceed And Excel): sister to the highly touted two year-old Ready Golightly. Dam is a sister to the Listed winner Inquiry and half-sister to the Group 3 placed Cloak. Grandam Screen is a Lonhro Group 3 winner from the family of Group 1 winners Dracula, Miss Sentimental and Complacent.

Lot 1170 brown filly from La Tikka Rosa (by Freeze): sister to the Hong Kong winner Larson, city class Field of Roses, the lightly raced placed Tikka Ready and promising Typical You. Out of a multiple city winning mare who is a half-sister to the multiple city winner Pink Perfection from the family of Group 1 winners Valley Girl and Round The World.

Lot 1201 black filly from Merirosvo (by Lonhro): second foal for an imported winner who was fourth in the Santa Anita Oaks, Group 2. Third dam is the US Champion 3Y0 Filly Smuggler whose dam is the six times Group 1 winner and Hall of Fame inductee Inside Information, a high class US family.

Lot 150 brown colt by Harry Angel from the Shadwell mare Istiraaha (by Redoute’s Choice): first live foal for a half-sister to the Group 1 miler Rewaaya from the wonderful Easy Date family of Snippets, Ertijaal, Sense Of Occasion and Not A Single Doubt.

Lot 1056 brown colt by Tosen Stardom from Across The Ditch (by Savabeel): first foal for a daughter of the Group 3 placed Sheila’s Star, half-sister to the stakes winner Jacqueline Rouge out of the Group 3 mare Northeast Sheila.

Lot 1063 bay colt by Grunt from Andaluz (by Husson): dam is a daughter of the Group 2 mare Olonana who is a half-sister to the Breeders Plate winner Super Savings. Hails from the same strong family as lot 949.

Lot 1130 brown colt by Rubick from Finishing Touch (by Invincible Spirit): bred on the same cross as Yes Yes Yes being a first foal for an imported UK winner whose grandam is the stakes winner Hi Dubai, sister to the champion Fantastic Light.

If you could pass on one golden rule to any apprentice it would be?

It takes a lifetime to build your reputation and 60 seconds to lose it, so always be true to the best human values in everything you do.