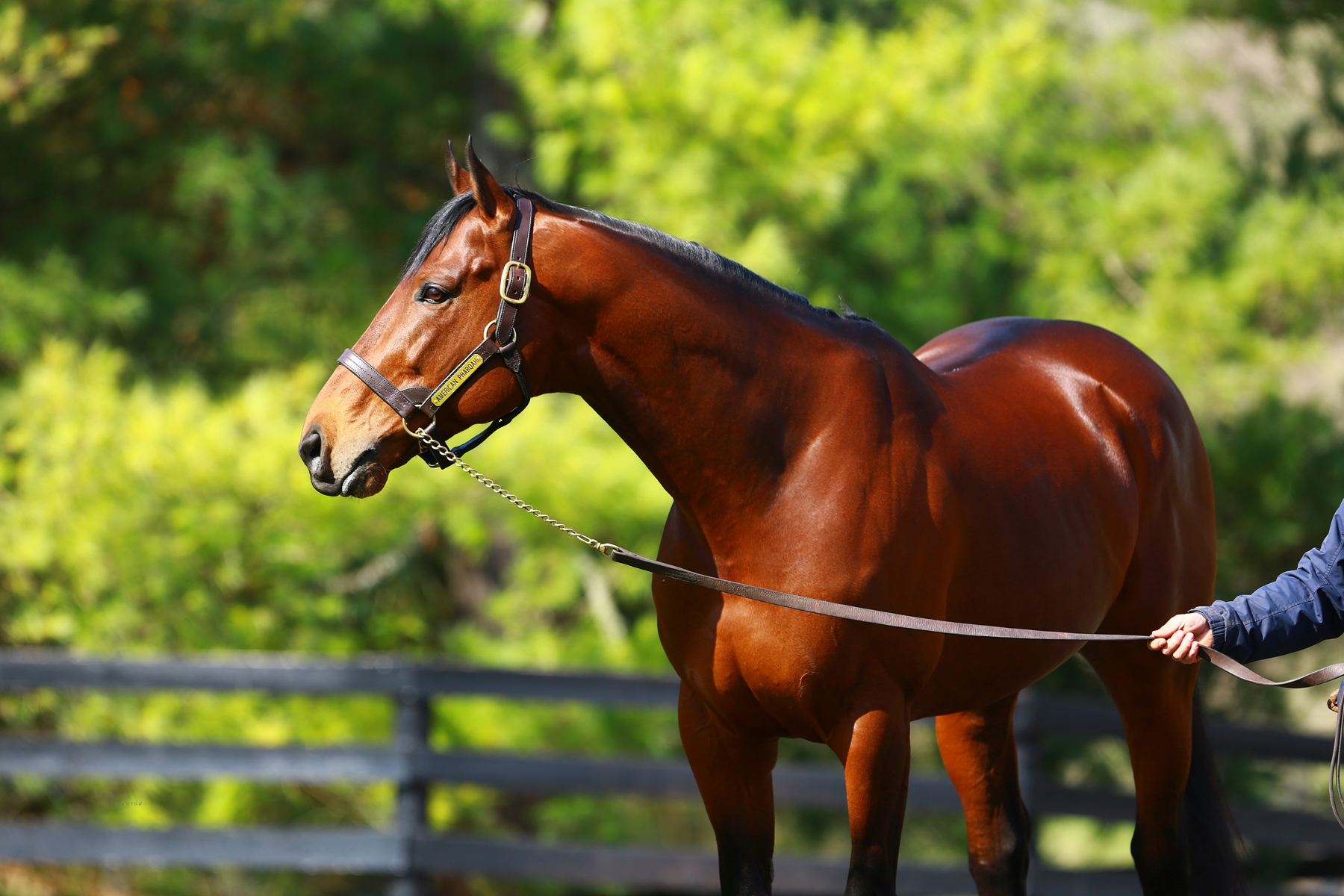 THERE is nothing like a horse to make a fool of a man. That saying applies to the great ones in particular and American Pharoah (USA) (Pioneerof the Nile-Littleprincessemma by Yankee Gentleman) the first winner of the US Triple Crown in 37 years is certainly one of those.

Just before he began his shuttle career, we discussed the prospects of American Pharoah as a sire in Australia and noted; “Although he was a two year-old champion, and although there is clearly considerable speed in the distaff side of his pedigree, it would be doing American Pharoah a disservice to expect him to be a prolific sire of precocious sprinting juveniles. As a racehorse he was notable for an exceptionally long stride, which must have been coupled to a phenomenal cardio-vascular system.

“As a result, American Pharoah had tremendous cruising speed, which he could sustain for extended distances. There is certainly every reason to expect him to be able to top-class juveniles, but in general they are more likely to win the ATC Champagne Stakes-Gr.1, as a prelude to a classic career, than peak in the Golden Slipper-Gr.1. With that in mind, it may serve breeders best not to send mares that are too extreme a contrast in type or aptitude.”

As it turns out, American Pharoah is getting a lot more speed and precocity that we expected and the exciting news for Australian breeders is that many of his runners have not only been fast and early, but they have excelled on turf.

When we looked at the pedigree of American Pharoah, we did observe that his dam LIttleprincessemma is by the very fast Storm Cat horse Yankee Gentleman, and is three-quarter sister to the Graded-winning sprinters Storm Wolf and Misty Rosette. American Pharoah’s second dam Exclusive Rosette, a daughter of the Exclusive Native stallion Ecliptical, was also speedy, gaining a stakes win at two in the 5.5f Florida Thoroughbred Charities Stakes.

The family is one that was developed for several generations by late Florida horseman Fred Hooper. American Pharoah’s third dam Zetta Jet is notably for being inbred 3fx4f,4m to Hooper’s star Olympia, a Hyperion grandson who was quick enough to defeat champion quarter horse mare Stella Moore in a match over her preferred distance. On reflection, we can also add that Yankee Gentleman’s sire Storm Cat was a very effective begetter of turf runners and that Exclusive Native, the grandsire of American Pharoah’s second dam, also sired several who showed talent on the lawn.

Generally speaking, long-striding, on pace dirt horses, for example Unbridled’s Song, don’t excel as stallions in Europe or on turf in North America, not because their offspring can’t handle turf per se, but because they are not suited to a racing style that puts a premium on a finishing kick. So their superior cardio and biomechanical efficiency may well see them cruising coming into the crunch end of the race, but what they can’t do is take advantage of that relative freshness by changing gear.

If sent along at a good pace in a turf sprint, however, a powerful cardio and relentless stride can well be turned to advantage, that is what may be happening with at a least a proportion of American Pharoah’s early runners, many out of mares that were themselves notably speedy.

The first to gain a stakes victory was Maven, who scored on dirt on his debut, then made a trip to Europe where he led virtually throughout to take the five furlong Prix du Bois-Gr.3 at Chantilly. Maven is out of Richies Party Girl, who won up to a mile, but was best over shorter distances, numbering the Santa Anita Juvenile Sprint and Kentucky Downs Ladies Sprint among her successes. She is by one-time shuttler Any Given Saturday, whose own sire Distorted Humor also briefly shuttled. This is also an extended version of the Unbridled/Distorted Humor cross that resulted in a true superhorse in the form of Arrogate.

Stakes winner two, Another Miracle, who captured the Skidmore Stakes at Saratoga in August, is another who has a background that will be more than familiar to Australians. His dam Retraceable, who won Canada’s major two year-old race the Princess Elizabeth Stakes, is by Medaglia d’Oro out of a mare by Dehere (who with Storm Cat gives a double of the Northern Dancer/Secretariat cross).

Early October has seen an American Pharoah explosion. On October 5, Skygaze was a clear first past the post in the Mazarine Stakes-Gr.3 over 8.5f at Woodbine, only to be disqualified to third for causing interference. The following day, Four Wheel Drive, who had broken the course record when winning the Rosie’s Stakes at Colonial Downs, took the Futurity Stakes-Gr.3 at Belmont Park, covering the six furlongs in a time the Trakus system caught at a blistering 1:07.89. Then on October 9, Sweet Melania (Storm Cat 4mx4m, second dam by Gone West, a son of Mr. Prospector
out of a mare by Secretariat), who had been narrowly defeated in the P.G. Johnson Stakes at Saratoga, went gun to tap to take the Jessamine Stakes-Gr.2 by 5.5 lengths.

Skygaze is out of a mare by Marquetry, who in 2000 shuttled to Vinery, leaving 35 foals in his sole Australian season. He has combined well with Storm Cat over the years, and he is a Mr. Prospector line horse whose dam is Northern Dancer/Nasrullah/Spy Song, and American Pharoah is a Mr. Prospector line horse out of a mare by a son of Storm Cat, who is Northern Dancer/ Nasrullah/Spy Song. Skygaze also goes back to a mare who is from the family of Secretariat and is closely related to that horse.

Four Wheel Drive, who is likely to be the home team’s leading candidate for the Breeders’ Cup Juvenile Turf Sprint-Gr.1, gives another strong pointer to how American Pharoah might work in Australia. He is out of Funfair, a sprint stakes winner by More Than Ready and his second dam is by a son of Mr. Prospector.

Sweet Melania’s dam Sweet N Discreet won the Sunshine Millions Distaff Stakes. She is by brilliant world high weight Discreet Cat, so a product of a pattern that often works, breeding a sire back to a stallion from his own broodmare sire line (in this case, Storm Cat). The third dam of Sweet Melania, Bering Cruise, is by Danzig out of Lassie’s Lady, and
is three-quarter sister to Foxhound and Honor Grades (who shuttled to New Zealand) and half-sister to Bite the Bullet.

There are already several other stakes placed American Pharoahs. Monarch of Egypt, out of a Group-winning and classic placed Galileo half-sister to Dutch Art, won over five furlongs and took second in the Phoenix Stakes-Gr.1 in Ireland. Saqqara King, out of a Gr.1-winning daughter of Tapit, scored over seven furlongs at Newmarket and has been placed second and third in Listed races in France. Envied, out of a Group-placed daughter of Halling (by Diesis, from the Sharpen Up line) took third in the Happy Ticket. So far, less than 50 of American Pharoah’s first crop of 161 foals have reached the track, and we suspect there are a lot more machine-like dirt runners of American Pharoah’s own kind to come.

We do have a glance of that possibility in the shape of American Theorum. Out of a mare by Maria’s Mon, he won over 5.5f on Del Mar and returned to take second to Eight Rings, the current favorite for the Breeders’ Cup Juvenile-Gr.1, in the American Pharoah Stakes. Although we have found plenty of Australian connections in the dams of American Pharoah’s stakes horses, we haven’t yet mentioned the strain most frequently found in Australia, that of Danehill. In fact he has yet to have a starter with Danehill in the pedigree, but there is one interesting indicator to the possibilities of a connection with that horse.

Danehill is by a Northern Dancer line stallion out of a mare by His Majesty, the same formula that produced Forestry, who is the male-line of the dam of Sweet Melania. When we look at American Pharoah’s runners we find three carrying His Majesty, including Sweet Melania; two carrying Graustark, the brother to His Majesty, including Skygazer; and three carrying Majestic Prince (whose second dam, Your Hostess, is three-quarter sister to the dam of His Majesty and Graustark), with Maven and American Theorum both having that strain through Majestic Prince’s son, Majestic Light, whose dam is by Ribot, the sire of His Majesty and Graustark. Another Miracle goes tail-female to Your Hostess.