Among the various strands that make up the Thoroughbred industry, once in a while someone takes the leap to start their own venture and quickly produces results that demand our attention. When talking about sale preparation in that context it is Kandice Pritchard and KBL Thoroughbreds that leap to mind. With some serious runs already on the board it is hard to believe this will be just the fourth Magic Millions Gold Coast Sale where KBL will have the shingle out. 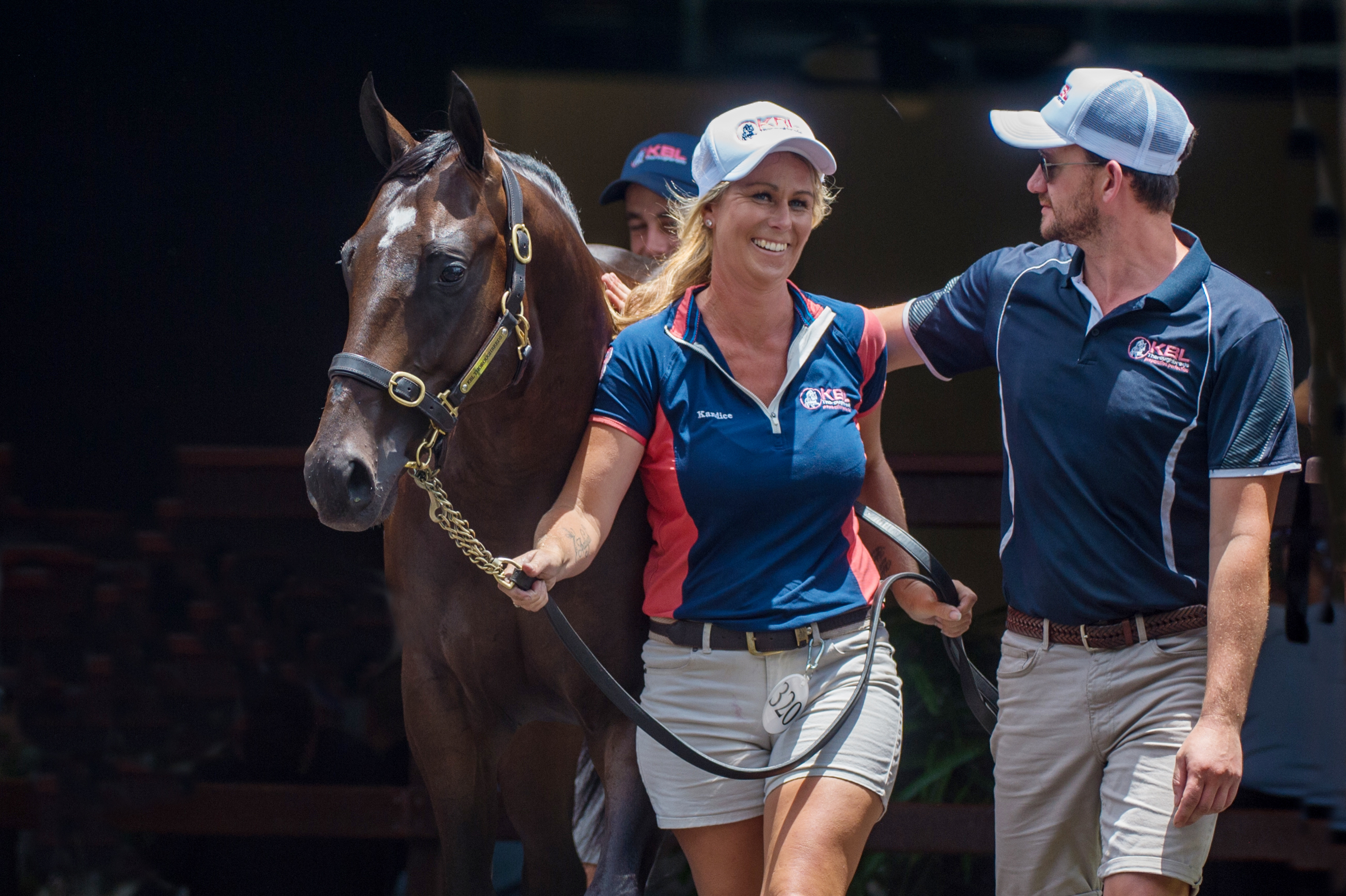 It is the second day of the Magic Millions Gold Coast Sale of 2019 and Lot 320, a colt by Zoustar, walks to the stage. Very much built in the mould of his sire, he is out of the Listed placed Al Maher mare Acouplamas and at this point in time his three-year-old half-brother, The August, has twice been Group placed and his year older half-brother by So You Think, Quick Thinker, is still three months off making his race debut. A few minutes later the gavel falls, and the colt leaves the stage, the screen above him showing a final bid of $1,075,000.

It’s nothing out of the ordinary for a youngster with such quality to reach seven figures, what is unusual is that his vendor KBL Thoroughbreds has only been operating as an entity for two tender years. Successful sale preparation businesses can go decades without being entrusted with such a horse, yet KBL were charged with presenting this colt a little over a year after opening up shop.

A string of exceptional results since have proven the Zoustar was no fluke, a $7000 pinhook returning $300,000 for a client and a $40,000 Zoustar reselling for $500,000 amongst others, all further cementing KBL’s reputation at the top end amongst consignors.
When discussing the draft Kandice gave an insight into the lengths KBL go to when preparing to go to auction. “This is our biggest draft and this is where we have always wanted to be as a business.

It helps that I love prepping yearlings over anything, it’s definitely my passion. We start from 3.30 every morning so we can work the horses before it gets hot. We are constantly looking over the horses, four to five times a day on average, watching things like feeding habits, and we will generally have one final look over them again at 8pm. It is a lot of work, but I love seeing the finished product and enjoy taking them to the sales and presenting them.” From watching the KBL team in action it is clear there is a strong emphasis on attention to detail and meeting the horse’s needs happening here.

It is testament to the skills of Kandice and her team that KBL will attend all major sales and that boxes for the 2021 Sales season are already at capacity. “Each sale rolls into the next and because once we are finished with Magic Millions January, we then head to Sydney, then its back to the Gold Coast for the QTIS sale then it is Easter and back for the Magic Millions National Sales, the programs cross over and we are always at full capacity. To be at this level so quickly for us is a dream come true.”

Kandice is looking forward to January and heading to the Gold Coast. Magic Millions starts the annual Sale season and it is known as a yearly highpoint for many in the industry. “The atmosphere on the Gold Coast is really good. Everyone is there, ready to go for another sales season and as it is your first draft to show for the year it is the first opportunity to be rewarded for your hard work,” said Kandice. Asked if KBL targets a particular type of horse to the Gold Coast she explained “There is a certain sort of type, but more importantly the horse has to have a pedigree page. The horse really needs some pedigree that is going to appeal to people.

The aforementioned, high priced, Zoustar colt was sold on behalf of respected industry figure Andrew Bowcock who spotted Kandice’s potential and pushed her to start up KBL. “It was Andrew that encouraged us to go out on our own and our first draft as KBL, at Magic Millions in 2018, consisted entirely of his horses.” That business relationship remains strong to this day and on behalf of Bowcock and his partners KBL will try and repeat the Zoustar score with five quality yearlings.

They lead off with Lot 89, a Nicconi filly who looks likely to go fast. By the same sire as Nature Strip, the filly is out of the Beautiful Crown mare Bella Corona who was a Listed winner at two and has produced six winners including the three-time Listed winner Bewhatyouwannabe (Fastnet Rock).

They follow her up with Lot 341, a Zoustar colt out of Girl In Flight by Commands. A more than useful filly on the track winning four times to Gr.3 level, Girl In Flight has had just the one foal to race to date, her daughter Night Witches (I Am Invincible) winning again recently at Moonee Valley, a third career success. “This is a ready-made racehorse, he has length and scope, a real athlete with a walk and temperament to match.”

Lot 631 is another Bowcock owned Zoustar colt, this one out of the Listed winner as a juvenile Pearl Star (Star Witness) while his grandam Pearl Of The Sea (Fastnet Rock) was placed fourth in the Gr.1 Champagne Stakes. “This fellow will be towards the top of the sale oozing quality as he does” offered Kandice. “The stars have aligned to produce this fellow and there is already a lot of industry talk about him.”

KBL will also present, on behalf of Bowcock Bloodstock and Stanley River Thoroughbreds, Lot 468, a Deep Field filly out of Laugh A Little, a daughter of Lonhro and the Danehill mare Chuckle. This is a speedy family that has produced the Magic Millions 2YO Classic winner Catnipped. “I like this filly. She is a really strong, forward, two-year-old type,” said Kandice. Laugh A Little is a half sister to the Gr.2 Villiers Stakes winner Crack Me Up (Mossman) and Grade 3 winner Hoofit (Mossman).

Amongst the Book Two lots that the partnership will put forward is Lot 1106, a Charge Forward lass out of the Beautiful Crown mare Suffer In Silence which makes the filly a three-quarter sister to Response, the dam of Gr.1 Golden Slipper winner Estijaab (Snitzel). Bowcock and KBL will also offer a colt by Super One out of La Femme Fatale (Fastnet Rock) that traces back to the Magic Millions winner Dancer’s Joy (Danzatore) as Lot 969.

Picking a few lots from the rest of the draft, Russian Revolution’s first crop daughter out of the highly talented Denman mare Denpurr will sell as Lot 222 and Kandice is delighted with her progress. “She is the first foal of the dam and she is an absolute beauty. She already looks a picture well before sale time. As they say, she is a type!” Denpurr won four times in Sydney and was Listed placed in Melbourne.

This sale represents the first opportunity for the market to buy yearlings by Spieth and KBL have a smashing colt of his out of the dual Gr.3 winning mare Triple Asset by Nadeem. “He is a really nice horse, a good type,” said Kandice. The colt comes from the family of Golden Slipper winner and successful sire Marauding.

Timing can be everything in selling a horse and in Lot 987’s case the catalogues went to print just before an important family update. By Spill The Beans out of the three-time winning General Nediym mare Love Of Liberty, the colt is a full brother to Ellsberg, who, at just his third start was placed third in the recent Gr.3 Spring Stakes at Newcastle.

Lot 1087 is a well put together Star Turn filly out of Testa Rossa’s daughter Sky Rubi. “Last year the mare’s Starcraft colt sold for $340,000 and this filly is equally beautiful. She’s a half-sister to the four-time winner Pinnacle Star (Starspangledbanner) and to a metropolitan winner who was placed fourth in a Gr.3 in California Honey (Starspangledbanner).”

Another first crop sire on show on the Gold Coast is Hellbent and Kandice likes the look of Lot 1064. The colt is out of the Redoute’s Choice mare Rupavari, a daughter of the New Zealand Two Thousand Guineas winner Clean Sweep (End Sweep) and a $310,000 yearling whose first foal to race is a winner. The I Am Invincible/Redoute’s Choice cross has worked time and time again.

Aside from those we have mentioned KBL have a host of horses that will be popular. There are colts by Pride Of Dubai, Toronado, Brazen Beau, Spirit Of Boom, Highland Reel, Rubick, Invader, Flying Artie, Epaulette, Starcraft, Better Than Ready, Exosphere and, perennial favourite, Choisir for buyers to look over. And there is no shortage of talent amongst the fillies with daughters of Merchant Navy, So You Think, Pride Of Dubai, No Nay Never, Divine Prophet and another Russian Revolution awaiting your inspection.