[FIRST PUBLISHED JANUARY 2020] From its inception in 1957, the Golden Slipper Stakes-Gr.1, 1200m has been a highly respected form guide for future stallion success, its inaugural winner Todman (still regarded as one of the best two-year-olds Australia has produced) setting the path with his 38 stakes winners. 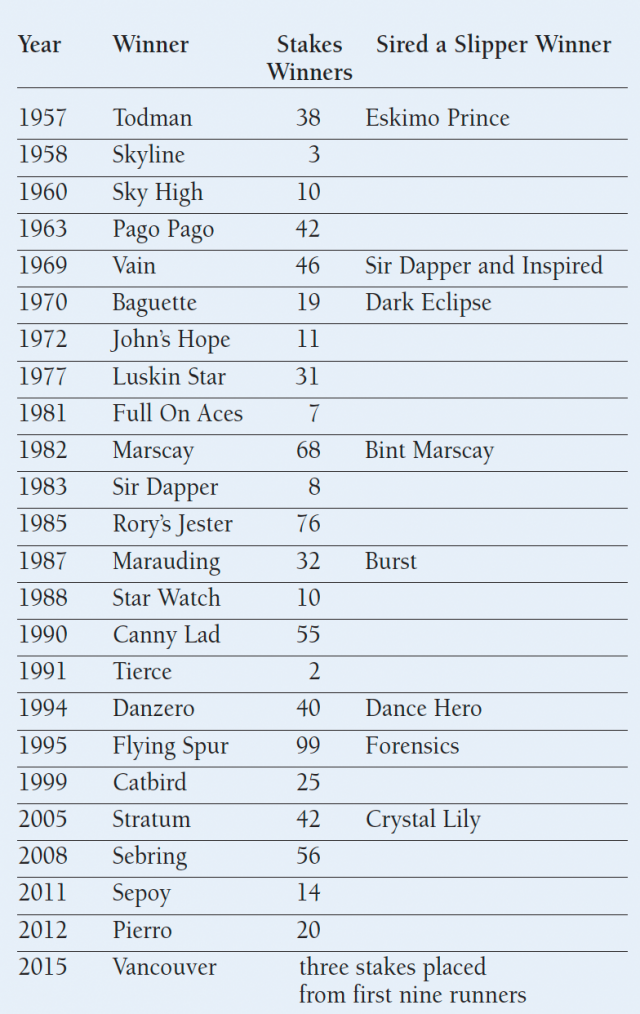 Since then 24 Golden Slipper winning colts have made their way to stud, all but one of those siring stakes winners, including eight who have gone on to sire another winner of the world’s richest juvenile dash; in the case of the legendary Vain two of them namely Sir Dapper and Inspired.

With recent winners Vancouver and Capitalist proving popular the race’s sire making mantle looks assured and at the moment its history is in the capable hands of Coolmore Stud’s outstanding galloper Pierro.

It was on that day this his trainer famously declared that racegoers had witnessed the following year’s Golden Slipper winner and on his way to his determined victory in the big race he also claimed the Silver Slipper Stakes-Gr.2, 1100m and the Todman Stakes-Gr.2, 1200m.

“I knew that this was a special colt,” Waterhouse said after the Golden Slipper, her opinion vindicated by Pierro’s subsequent form; wins in the AJC Sires’ Produce Stakes-Gr.1, 1400m and the Champagne Stakes-Gr.1, 1600m seeing him end his two-year-old career as the unbeaten winner of six races.

Dominant victories in the Run To The Rose-Gr.3, 1200m and the Stutt Stakes-Gr.2, 1600m saw Pierro start odds-on in the Caulfield Guineas-Gr.1, 1600m. It was in that Classic that he first tasted defeat but he certainly lost no admirers with his gallant second to the emerging All Too Hard.

Taking on the country’s best older horses in the W.S Cox Plate-Gr.1, 2040m, Pierro was a game third. He would race another four times as a late three-year-old, adding to his already impressive resume the Hobartville Stakes-Gr.2, 1400m, the Canterbury Stakes-Gr.1, 1300m and the George Ryder Stakes-Gr.1, 1500m; at his finale in the Doncaster Handicap-Gr.1, 1600m showing great heart in defeat conceding 4kg to the winner Sacred Falls.

It was unfortunate for racegoers that we did not get to see Pierro at four but the immediate racetrack loss made for long term gain with Pierro proving a great representative of the Sir Tristram line.

A line of high class gallopers, Pierro’s sire Lonhro and grandsire Octagonal both considered amongst Australia’s all-time greats, between them winning 21 Group One races.

With his first crop only five (Pierro was Australia’s Champion First Season and Second Season Sire) he has done a great job as he enters 2020 as the country’s leading sire by earnings and stakes winners.

On December 21 represented by five winners including the rising Perth star Regal Power (whose victory in the Ted van Heemst Stakes-Gr.2, 2100m was his fifth stakes success), Pierro has already sired 20 stakes winners with an excellent winners-to-runners strike rate not far off 67%.

Pierro’s stakes winner ratio is a very healthy 7.2%, his best to date including the Group One gallopers Pierata, Arcadia Queen, Regal Power, Levendi, Shadow Hero and Pinot. From the start of the current season to the time of writing (December 22), his progeny had won 106 races.

Bluebloods readers who study our exclusive APEX ratings (developed by Bill Oppenheim) will have been well rewarded in the case of Pierro. Our APEX ratings clearly indicated that Snitzel had escellent prospects of becoming champion sire when his fee was still $30K, and two years ago they also indicated that Pierro was headed in the same direction. There was value to be had.
Pierro’s pedigree has that lovely international flavour, his city winning dam Miss Right Note (also dam of the Wakeful Stakes-Gr.2, 2000m winner Ambience) being a half-sister by the European star Daylami to Octagonal’s European bred dual Group One winner Laverock.

Mumtaz Begum is also ancestress of Kalamoun whose son Kenmare appears in the pedigrees of three of Pierro’s Group One winners; Shadow Hero, Arcadia Queen and Regal power.

Also of note are Pierro’s two Group One winners (Pierata and Pinot), to date the only two stakes winners carrying a cross of Zabeel. n